Gibs: Phones, MMOs and the Future

Posts here have been few and far between, but of course real life must come first in anything which isn’t a real job, and this definitely isn’t a real job, as much as I’d like to get paid to chat about games all day it’s a saturated field to say the least.

So what is/are ‘Gibs’? Apart from being the chunky bits one will experience when shoving a rocket in somebody’s face in a classic arena based shooter, it’s also a banner under which smaller discussion pieces will appear that aren’t impossibly over-wordy enough to be worth their own entry.

I like mobile technology, let’s be honest here. Bizarrely however, I really do not care at all for ‘apps’, that is, games and feature programs that pull attention away from the core functions of the device itself. If you want to impress me personally, make your core feature set absolutely incredible, I want the best contacts hub, calendar, messaging system, photo viewer, whatever. I am immune to being impressed by something that your company did not do themselves when it comes to mobile devices, I don’t care if Skype or someone made the best IM app in the universe, and it’s on your platform, you should have made a better one in the first place.

“I WANT ACTIVESYNC, NOT ANOTHER FART APP”

So it might become obvious at this point that I’m not an iPhone user. Not a slight against the device itself, although I will complain endlessly about each ‘new’ feature they claim (3G, Hardware Rendering, GPS, front facing camera etc. etc.) will revolutionize the industry once it’s placed in an iPhone, five years after it’s been in lowest end Nokia. I’m not blaming Apple themselves for the deluge of crap that their app store hosts, that’s pretty much the user base demanding them, but Apple really isn’t helping by encouraging it.

Anyway, Windows Phone 7. It focuses on apps, on looks and on not confusing users with behind the scenes options. So why am I looking forward to it? Quite frankly, I can only ask, have you seen the functionality and fluidity of the UI? Microsoft seemed to have just dusted off the old DreamStealer and made exactly the phone I wanted in every way shape and form. Whereas Apple and Google seem to try and make things more analogue, Apple especially making a lot of official applications wood-panelled, and taking the compass from a 16th century galleon, Microsoft suddenly realized ‘Oh yeah, this is a computer!’ and made an interface that just gets the information across and gives the user free reign to use it how they wish with little to no eye-candy and a few swipes and taps. The whole UI is very ‘active’ the concept of Live Tiles and so forth are extremely appealing.

So with that said, it may not be as deep as Windows Mobile, but Windows Phone does what it’s supposed to do in the most functional way possible. Be a phone, be a PDA. So with little less than a month to go until launch, how about advertising it somewhere in the high street! 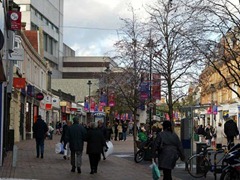 I started playing an MMO recently. That may be something of an empty statement nowadays, especially considering most gamers have at least one MMO on the go at any given time, and a startling number have several, however in all my years of gaming I’ve only ever paid for one MMO prior to this. Given that I’m an FPS nut, take a wild guess on what that was, but don’t be too disheartened if you can’t guess, it’s very likely that you missed it entirely given it’s flash in the pan nature. 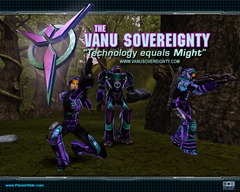 “Neon purple not strictly being the best camouflage ever.”

PlanetSide, a complete anomaly in the MMO space from its inception in 2003 to pretty much this day (in an ‘on life support’ kind of way) over seven years later. What made PlanetSide different? It was an MMOFPS. Whereas the Battlefield series in various guises has been famous for its heated 32 vs. 32 maps, PlanetSide used the leverage of an MMO subscription fee to bring that number to 100 vs. 100 or more on maps bigger than any featured in a multiplayer shooter before or since. Not only was the scale unprecedented, but the shooting didn’t suffer as a result, no click to move, this was undiluted FPS action on a huge scale, with vehicles and probably the only game I’ve played to date where human players across a whole server banded together to perform a common goal because it was the right thing to do. Although it was nothing like being in an actual army, the camaraderie was real, and as Rock, Paper, Shotgun puts it, “I WAS THERE, MAN” syndrome was rampant.

Maybe more about PlanetSide again some time, as I segue into the second title I’ve somehow decided to turn my wallet inside out for every month, Eve Online. To the uninformed, Eve can most easily be described as a combination of window management and clicking on things in those windows, but that really doesn’t make it sound fun or exciting. Which it is. Maybe. Eve is another anomaly in the MMO world, so maybe I just like games that don’t involve swords, sorcery, hotbars and mana. Eve is a game of exploration, combat and horrible, soul-crushing loss, dependant on the situation, and if somebody decided to be an ass.

So in regards to this blog? I don’t know to be honest. I initially started it years ago, revamped it in the last few months and then never found time to update it. It was supposed to be updated often with thoughts on the industry and so forth, maybe another short novel like ‘Let’s Talk About’, despite its considerable controversy (can it be controversial if nobody reads it?) in terms of how much skill certain genres of games take. Anyways, watch this space, or don’t, and maybe there will be more in the future, with more time to update, who knows.